This One’s For Switzerland

As you may have heard, the Swiss ended their 88-year long stagnant streak in the individual show jumping portion of the London 2012 Olympics.

Instead of a news writeup, here is what you really want to read: the equestrian olympic TV schedule for NBC.

I am in no way affiliated with NBC. I just like horses. I’m not even going to waste any space with pictures. All these times are courtesy of Yahoo:

GO USA, or whoever you root for.

In an article in the Wall Street Journal’s Washington Wire, it was released that a recent ad featuring Rafalca was pulled from the air. The ad, which featured criticising remarks about Romney’s tax return statements also showed footage of Rafalca competing in dressage events. It’s no secret that horseback riding is an impressively expensive sport, but in a statement by President Barack Obama, it was mentioned that he considered the ad was in bad taste and said he was against personal attacks on family members. In an interview with Good Morning America, Mrs. Romney’s hurt reaction caused concern that the ad hit too close to home: Mrs. Romney uses dressage to combat her multiple sclerosis and has spoken about its benefits in public before. Have we had the last laugh about the Romneys?

Ann Romney and Rafalca, who will be competing in the London 2012 Olympics. Image courtesy of The New Yorker.

This is Not Equestrian: Fashion Faux Pas

I normally try to avoid sounding like a jerk, but there are a few things that annoy me from time to time. One is when I ride badly, another is when I wreck a perfectly manicure trying to take out braids with a seam ripper, but the largest annoyance I have is when people label clothing ‘equestrian’. I’ve mentioned it before, however I’m revisiting the topic, and here’s why:

Apart from the red blazer (reminiscent of an olympic show jumping blazer worn by the USET) we’re not buying it. Image courtesy of Fashion Gone Rogue.

Miranda Kerr recently appeared on the cover of Bazaar, which titled its “equestrian inspired” photo shoot Riding High (possibly the mental state of the person that designed these clothes?). As an equestrian, I expected to see tailoring reminiscent of hunt coats, a monogrammed collar, or at the very least a helmet included. Instead what I was presented with was unusual fringed bras, a token blazer, and dominatrix boots. Ok, granted in the last shot, there was an actual horse, to Bazaar’s credit, but still….if by ‘inspired’ you mean “there’s a horse in one of the photos”…well then bravo. This equestrian would venture to say that this look is more inspired by Lord of the Rings, Underworld, and possibly an upper-crust strip club. 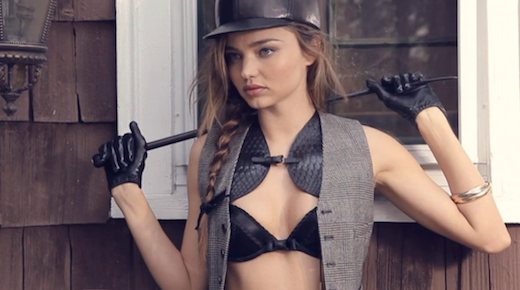 Ah, apologies we spoke too soon: apparently the ‘helmet’ was the bizarre leather cabby-hat that seems to be offering no protection what so ever. Also, there was the typical gimmicky crop posing technique. Image courtesy of CoCo’s Tea Party

Attack of the Clones

The legendary Gem Twist has a clone! Did you know? Image courtesy of Tuesday’s Horse

Confused about the title? Well here’s the skinny: clones of former olympic champion horses have no been approved to compete in future olympic endeavors! In a recent ABC article, the The Fédération Equestre Internationale(FEI) confirmed that though these clones would be too young to compete in the London 2012 olympics, they would be allowed to compete in upcoming events. The decision came after an inquiry into whether or not these clones of equine superstars would have an advantage over their un-cloned competitors. The result? Clones were deemed only 98% accurate copies of their originals, but it was decided that the training and upbringing of the horse was what determined its ability to compete, not genes. Perhaps in the next olympics we might be able to sneak a peek at Gem Twist’s clone.

Get a good look! This is Gemini Twist, the rumored clone of Gem Twist who has been training under equestrian legend Frank Chapot. Image courtesy of Young Jumpers.

Taking On ‘The Week’

As an avid equestrian that reads The Week, I was insulted by an article written recently in the July 6-13 2012 issue on the ridicule of the Romney’s horse Rafalca. Admittedly, the buzz around the horse has been a bit much, but that wasn’t what pissed me off. The tab that caught my eye on the top of the page, depicted Rafalca performing with Jan Eberling with the caption, “Making fun of dancing horses”. Intrigued, I turned to page 16 to read what was the most irritating posts I’ve read slandering equestrianism in a while.

Just in case you missed this especially offensive article, feel free to ask me for a copy, I’m happy to scan it with my phone and send you a copy.

END_OF_DOCUMENT_TOKEN_TO_BE_REPLACED

You may have read previously that Black Caviar had been the horse to watch at the Royal Ascot Diamond Jubilee Stakes. Well, though America didn’t ‘have another‘, England celebrated  the monumental 22nd win for the Australian mare. The 6 year-old is now ranked 2nd behind Queen Anne Stakes winner Frankel, who amazed fans by winning by 11 lengths. Though it has been discovered recently that the mare hand endured some serious injuries after her win, sources have confirmed the mare will be resting and well-treated until she is race-ready again.

Frankel. currently ranked as the top racing mare in the world. She doesn’t just look fast, she IS fast. Image courtesy of Bet365.

Initially purchased at a Lakers charity auction by basketball stars Kobe Bryant and Pau Gasol, Siempre Mio finished in second by a nose to Valkyrie Missile at the Betfair Hollywood Park this Sunday. After the race, Siempre Mio changed hands after five offers were made on the gelding. Now Siempre Mio is owned by Donkey Island Racing, a group including New Orleans Saints quarterback Drew Bees.

Ann Romney has long been a rider to combat her Multiple Sclerosis, but it seems the Romneys may soon have a chance at Olympic stardom. Rafalca, a horse owned by the Romneys has recently made the short list for the 2012 London Olympics in dressage.

Should the horse succeed, Rafalca will join the political must-see list of competitors alongside Zara Phillips (who has secured a spot in eventing on the British team). As Stephen Colbert vivaciously declared, Dressage will be the ‘official Sport of the Summer’, and it will be interesting to see how veteran dressage rider and Jan Eberling are effected by being such high-profile horses at the event.

On a less professional note, I would like to advise the New York Times that not all horse events are called “races“. In the article’s title ‘For Ann Romney, a Different Sort of Horse Race”, it is implied that Rafalca is a racing horse. This is highly inaccurate. More succinctly, what Rafalca does is compete at a “horse show“. A tennis game is a “match“, similarly a track competition is a “meet“. You wouldn’t refer to a soccer game as a soccer “meet“, so please do your homework before carelessly mis-labelling an equestrian event.

What do you think? Will we have a star-studded summer olympics?